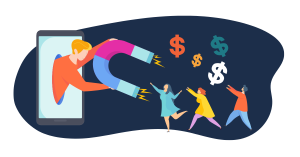 “Potential recession.” “Rising inflation.” “Economic uncertainty.” Have you caught these phrases in the news recently? As a business owner, they’ve probably created a lot of scary feelings and questions: “Are we heading into a recession? What’s the inflation rate right now? Maybe I do feel uncertain about my business’s future.”

Suddenly, it seems wise to cut the fat, stop spending and investing, and prepare your business to weather the economic downturn that appears to be on the horizon. To pull in your business’s expenditure legs like a turtle and hunker down.

One of the first budget “extras” to go is often marketing. After all, if people aren’t buying, why are you trying to reach them? In fact, we recently wrote a blog about why cutting the things businesses think are marketing may be wise during a recession.

Of course, those things aren’t really “marketing,” and if you only get one takeaway from this post, let it be:

Businesses that increase marketing during a recession outpace their competitors in the long run.

You might be saying, “Of course you recommend increased marketing – you’re marketing people!” But this trend has been supported by data that spans a century. We’ll touch on some examples, but feel free to check out the more in-depth studies on these business patterns.

First up? A Harvard dissertation written by Roland Vaile nearly a hundred years ago, in 1927, actually reported this finding from a survey of 250 companies. Those that increased their advertising budget not only enjoyed increased sales during the post-WWI recession – their sales boost continued into the Roaring ‘20s.

Okay. But how about some more concrete examples?

During the Great Depression, Kellogg’s gained traction over Post as the major cereal producer in America. The defining difference: Post cut back its advertising while Kellogg’s doubled down (literally, doubling their ad budget). This is when the “Snap, crackle, pop” campaign began, and it has served them well since then.

During the Energy Crisis of the ‘70s, Toyota held strong in its marketing presence, even though solid previous sales might have encouraged a more conservative coast through the recession. This allowed Toyota to pull ahead of Volkswagen as the top imported car in the mid ‘70s.

And remember the surge of Taco Bells, Pizza Huts, and the combination Pizza Bell/Taco Hut chimeras in the ‘90s? That was no coincidence. In response to the ‘90/’91 recession, McDonald’s cut back its advertising – and Taco Bell and Pizza Hut amped up their ads to gain ground in fast food territory.

More recently, Del Monte Foods used the 2008 recession as a chance to grow, not shrink, their fruit market with daring and colorful campaigns. They climbed from a $10.1 million loss to a $58.6 million profit after a year of bolder marketing.

There are countless more examples to be found. But we promised you a “why,” and we still need to get there.

A (Wo)Man Out Standing in His(Her) Field

The key reasoning behind this recession strategy: stand out from the crowd by acting in a way that’s a little (or a lot) counterintuitive!

It’s natural for humans and businesses to want to draw their piles of corn/sheepskins/money near in the shadow of a long winter. And, to some degree, you should. Absolutely balance your budget so that your company can, at minimum, survive a reduced profit period.

But respond to the long game rather than reacting to fear. In recessions, consumers are still spending – just less. If most companies pull back their marketing, your shiny efforts are more likely to grab the attention of those who are looking to buy goods or services in your corner.

And the benefits are actually exponential – because recessions end. Spending always comes back. Right now, you’re surrounded by a parched playing field. So the one kernel you plant this year sticks in people’s minds, yielding stronger brand recognition post-recession.

Basically, your customers will be like, “Who provided me cozy, fleece-lined leggings during the long winter? They’re on my good list!”

If you want to hear it in more “economist” terms:

And that brings us back to Marketing Lesson 101, the reason you added that line to your budget in the first place. What’s the good of a functional, practical, and innovative business if nobody knows about it?

As a plus, digital marketing has shown greater longevity and flexibility than print or in-person campaigns – basically, you get more bang-for-your-buck. Something to keep in mind during times when budgets are tight.